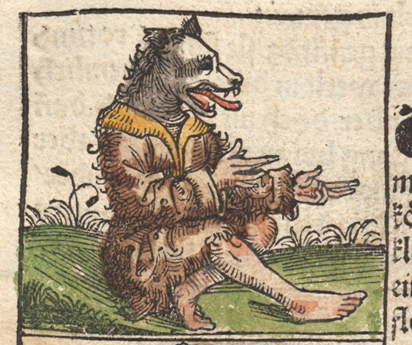 That all races, ethnicities, man and woman all belong to the same species sounds like a truism. However, this was of some point of contention during the sixteenth century. The discussion surrounding non-European foreigners paralleled with the discussion involving the mythological monstrous races, including hybrid canine creatures. During the sixteenth century, the dog-headed race, the cynocephali, were an expression of where foreigners laid on the human-animal divide as early modern Europe Christendom struggled to conceive foreign out-groups within the same category as themselves. To be equated with ‘man’, meant to live and to look European. Early modern Germanic illustrative prints and textual sources took the negative characteristics of dogs such as aggression, promiscuity, scavenging, barking, and killing and associated them with the foreign Other.

It was not just their canine heads that designated the cynocephali as Other, but also their habitat, where they were frequently portrayed against an ambiguous landscape instead of within the context of the civilising influence of a city. They also evolved from representing wonders from ambiguous far regions of the world to being associated with specific peoples such as the Mongols from the East and Native Americans of the New World.

The motif of exaggerated hand gestures was also used to illustrate the coarse mannerisms and unintelligible speech of ‘barbarous’ people in juxtaposition to the composed and articulate European explorers.  As if to emphasise their primitivism, the cynocephali were described as not being able to speak, but only bark like dogs.

Cynocephali were portrayed either nude or wearing crude animal skins. The lack of sophisticated European clothing further separated cynocephali from the idea of the ‘civilised’ West, as well as the human-animal divide.

The dog-headed cynocephali were used to illustrate cannibals for their ferocious appearance and because dogs were used as a symbol for gluttony.  Cannibalism was not only used as a sign of being less than human, but was associated with heretics: Jews, witches, Mongols, Turks were all accused of cannibalism.

These motifs paralleled with how the otherness of foreigners in the East and New World were constructed where their signs of primitiveness were related to their level of animality. These motifs made all foreign people appear interchangeable to the Western viewer and became composites of what was foreign and ‘Other’.

To understand the cynocephali is to understand how Europeans viewed outsiders who appeared different to themselves. To them, foreigners were primitive, which made them not quite human, but not quite animal either. The dog-headed cynocephali encapsulated this paradox more than the other monstrous race.

The construction of cynocephali in sixteenth-century Germanic prints maintains relevance today as members of society continue to be dehumanised as outgroups likened to ‘dogs’ or as ‘fleas’.  The significance of being likened to dogs is highlighted in the enslavement of Native Americans during the sixteenth century in the German and Spanish colonies when their humanity was questioned and used to justify their horrific treatment. Dehumanising rhetoric as we all know led to the devastating consequences during the Third Reich. The dangers of current rhetoric and imagery needs to be considered within this historical framework as they can lead to real world consequences.

Modified from my talk delivered at Cocktails in the Barr Smith Library; an evening for donors, 25 September 2017.

This work is licensed under a Creative Commons Attribution-NonCommercial-ShareAlike 4.0 International License.