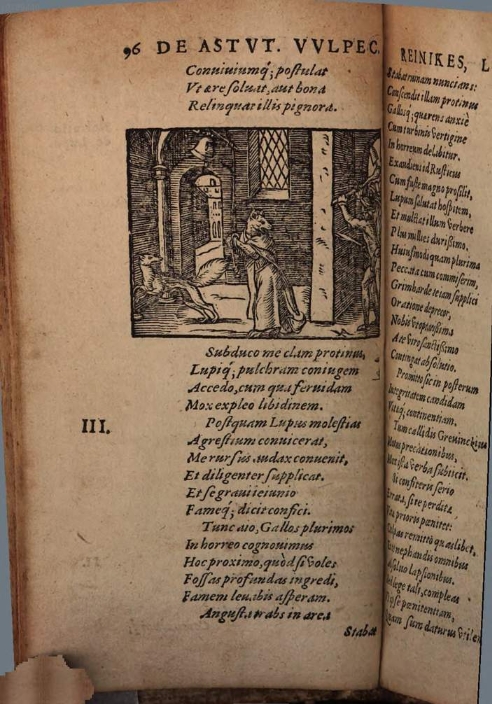 Medieval bestiaries and fables used animals as metaphors for the human condition. They were used to both mirror and to criticise society. Anti-clerical fables include the medieval folk characters Reynard the Fox (Reinecke Fuchs), and his companions Isengrim (or Ysengrin) the wolf. The medieval French fables were translated into multiple languages including Low German in 1498. Amid the characters’ escapades, the trickster nature of the fox competed with the brute strength of the wolf. The wolf was a common character in medieval fables who were known for their evil and greedy ways. They became symbolic of nobility gone astray. They were dissatisfied with their place in society and always longed for more (Salisbury, 1994, p. 130). This characteristic was symbolised in Reynard the Fox fable where Isengrim the wolf was continuously in search of food and was never satisfied.

As the Reynard the Fox tale demonstrates, the wolf who was the symbol of greed became the perfect motif to represent society’s distrust of the clergy and thereby othering them from mainstream society. It further provided the motif for Protestant propaganda during the 1520s, at the height of printed polemic. Isengrim the wolf wanted to become a monk in the fable to be better fed and served to symbolise the greed of monks (Branch III, 268-332). This was a common source of anti-clericalism as the clergy were often seen as a profession rather than a spiritual endeavour. This is because many were entered by their parents over a personal calling and regarded as less devout than the people they served. Therefore, individually, monks were not seen as having a monopoly on spirituality (Friedrichs, 1995, p. 68). In this way, the epic of the greedy anthropomorphised wolf and fox illustrates reformation thought before Martin Luther published his Ninety-five Theses, which is commonly accepted as the start of the Protestant Reformation. The satire helped to delegitimise the clergy, thus providing the conditions to criticise and challenge them leading to the Protestant Reformation.

In an episode representing the greed of wolves and further served to symbolise the greed of the clergy, Isengrim’s brother, Primaut for example, is pulled into the escapades of Reynard (Branch XIV). Upon finding a box of communion wafers dropped by a priest, the wolf and the fox search for more food in a local Church. The greed of the wolf is underscored when Primaut states: ‘But this food only makes me feel worse, for the more I might eat of them the hungrier I’d feel’ (Branch XVI: 274-6). This led to the over-consumption of bread, meat, and wine, a theme that often led Reynard’s victims to their down-fall (Branch V: 246). In a state of intoxication, Reynard provided Primaut with a monk’s tonsure haircut to conduct their mock mass. This episode was illustrated by Jost Amman (1539-1591) who depicted the moment that Primaut rang the Church bells that led to the town’s villages being aware of their presence in the Church. While Reynard managed to flee the Church, Primaut was found by the peasants and was almost killed. In this way, the fable reveals resentment of clerical greed and corruption.

Gerald Strauss, ‘Introduction to “How the Mighty Rule: Three Chapters from Reynard the Fox (1498),”’ in Gerald Strauss(ed.), Manifestations of Discontent in Germany on the Eve of the Reformation: A Collection of Documents Selected, Trans. Gerald Strauss, Bloomington: Indiana University Press, 1971 p. 89.